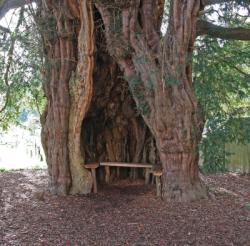 The Tree was re-measured in April 2006. It was 30ft 11ins at 4’6” from the ground. It has just been pruned for the first time in many many years. We estimate that we have probably removed about 6 ton of dead timbers and unnecessary branches, which were resting on the ground. It took 45 Man hours, and more than 8 trailer loads of rubbish to do this work. We think the Tree will appreciate what we have done to lighten its load.

The Parochial Church Council have a Certificate stating that the Tree is 1500 year old.People who dowse state that they can confirm an age of 1508 years old which means that the tree was planted in at least the year 500.