Tower Bells at St Bartholomew’s Church
There is a peal of six bells in the tower which were not used for many years. In 1996 a novice team wasvformed and bell ringing became a vital part of Sunday services. The bells were in poor condition but locally approximately £16,000 was raised which, with a grant from the Millennium lottery of £15,000, paid for their refurbishment. 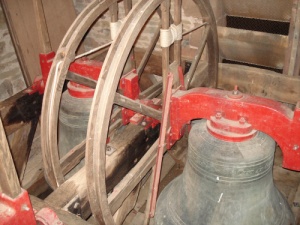 New headstocks, clappers, stays, ropes and pulleys were made by J Taylor of Loughborough. Work in the tower was undertaken by Arthur Berry of Malvern. All the work was completed in December 1999in time to ring in the New Millennium.

Since then many visitors have climbed the tower to ring the bells. In 2003 a further £31,000 had to be raised to re-lead the tower roof which was leaking on the new bell frame. Historic footprints graved into the original lead covering have been preserved and re-laid over the new. The dates and inscriptions on the bells are set out below, together with their approximate weights.

The oblique stroke (/) denotes that the founder’s
mark is below the inscription band. All inscriptions are in capitals. On the Second and Tenor the first letter of each word is larger. Decorative borders and stops between words are not included in the above description. All are by the Rudhall family of Gloucester except the Fifth by John Finch. Full details are in “The Church Bells of Herefordshire” by F. Sharpe FSA.

The clock was made by Joyce of Whitchurch. The
mechanism was hand wound regularly – the two weights were approximately 1 cwt and 1.5 cwt. With a grant from the Parish Council to celebrate the Millennium the winding mechanism was electrified. 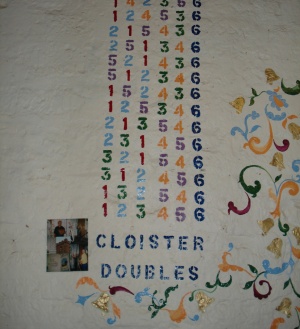