This beautiful, marble memorial to 32 local men who gave their lives fighting in WWI is located in the North aisle opposite the entrance porch.

Jenny Harrison of Ledbury has researched each of the men listed on the memorial.  The results of her research have been uploaded to this site in .pdf form.  You can read about each of the men by clicking on the links below.  The PCC wish to thank her for the untold hours that she has spent undertaking this research.

The church has her original research which is available for viewing.  If you would like to see it, please contact Janet Chapman on 01531 660664. 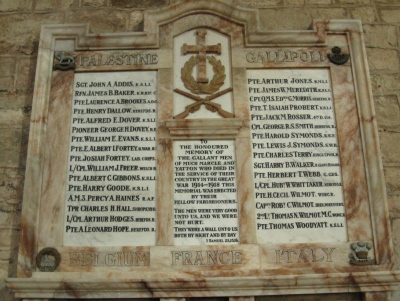